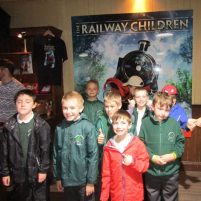 ‘The Railway Children’ is a very modern production of a well-known children’s story, performed on a siding of Kings Cross Station, London with rows of seats for the audience either side of the track.

There was an audible gasp from everyone at the end of the first half, with the arrival of a real steam engine and carriage puffing into view.

One little boy thought the production “scored 56 out of 10 ” … it was that good!