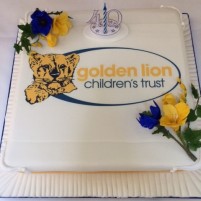 More than fifty guests who had each played a part in the history of the Golden Lion Children’s Trust enjoyed a special afternoon tea at the Arora Hotel, Crawley on Monday 25th November 2013 as part of the GLCT 40th Birthday Year celebrations.

The event was also attended by the Mayor of Crawley Bob Burgess plus Henry Smith MP.

In his welcoming speech Steve Taylor, GLCT Secretary, commented that by coincidence the day was the anniversary of the death of Harry Davis, Late President of the Golden Lion Children’s Trust and a founder member of the charity. When Harry and his colleagues started the charity in 1973 at Gatwick Airport they would not have dreamt it would still be actively supporting children with special needs and disadvantaged young people in 2013.

Guests were reminded that in 2004 the GLCT received The Queen’s Golden Jubilee Award for Voluntary Services, and were also told of the GLCT 40th Birthday Year Appeal – where each £100 raised over the next few months will pay for a child plus their carer to be taken on a special trip in 2014.