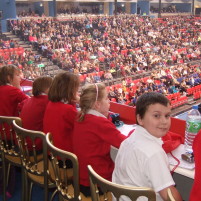 On 18th December 2013 an excited group of pupils from Harbour Primary School, Newhaven enjoyed an afternoon at Olympia with the Golden Lion Children’s Trust. For most of the children this was their first trip to London. To be guests in Box 16 overlooking the main arena made the visit very special for them.

They watched junior riders competing with professional show jumpers; cheered loudly for dogs racing round in the Kennel Club ABC Speed Jumping; saw displays by riders from the Royal Andalusian School of Equestrian Art; were amazed by the speed of the Shetland Pony Grand National; watched world class riders competing and enjoyed the Dickens Christmas Finale (complete with falling snow). The school staff were astonished at how the children were absorbed by each activity in the arena.

Throughout the afternoon the group enjoyed refreshments; were invited to meet a very young Shetland pony brought up specially for the guests to see; received hats and rosettes;  and even received a  toy each to take home as a memento of their visit.

The children emailed comments after the show saying which were their favourite parts – one little girl spoke for the entire group by writing “I just loved everything”.

Thanks to the generous support of Mrs Georgina Andrews and her team everyone in the GLCT group had a fantastic afternoon – a real festive treat!